I am trying to play a 6k video on a video dome but the performance is very quite bad. I have a good PC but still everything in the view is lagging and degrades the performance. How do I optimize it? 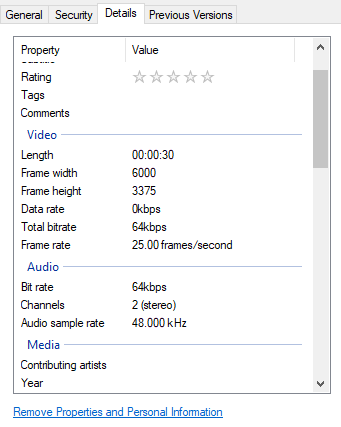 Another thing is, none of the video dome examples are working (360 Video Domes | Babylon.js Documentation)

Think about what’s needed to render a 6K video. 6000x3375 pixels are being sent to the GPU on each frame (since it is a video). The amount of memory needed is enormous, and of course it needs to be processed to generate the right projection. If your screen target is not a 6K screen, there is little reason to use such a high-resolution video.

Actually a 6K is not really “high resolution” for a spherical environment. As you see just a section, e.g on a HD screen it would already be lower than the native pixel width.
… I think Forza Horizon 5 uses 16K which is pretty impressive I think ;).
Q is, how to get that to work fluidly, which I cannot contribute unfortunately. maybe you could lower framerates and blend between images?
Best. Werner

Video framerate is already 25 FPS, I believe we don’t take that into account and update on each frame. that might be an optimization we could look into on our side.

As you see just a section

I didn’t know about Forza, but I am pretty sure it is also GPU-optimized. it might use lower resolution for older or slower GPUs. here there is no information regarding the device it is running on. Try loading a few large images on a mobile device and see how the device crashes. We are talking about a desktop, so I can only assume it has a proper GPU.

Also - we need to read the video texture and store it as a WebGL image. more pixels mean more time for that process as well.