And here is a simple default Viewer configuration:

There are two problems:

Are the configuration options which may address these problems ?

Adding @RaananW the father of the viewer

Thanks. Handedness in the viewer appears to be addressed by serialization of scene.useRightHandedSystem:

I am experimenting with the sandbox and loading a babylon model intended to be used in a RHS scene. Here is a PG which shows how the model should be loaded: https://playground.babylonjs.com/#58T0JY#22 Sandbox assumes the default LHS and therefore shows the model inside out: [image] Is there a way to configure the sandbox viewer for a RHS model ?

It may work to group everything under a single no-op root transform although I hope that is not necessary.

First, to the RHS. Anything you pass to scene.flags will be used to extend the scene. And though it is not a part of the declaration file, RHS can be used as well so adding:

Not sure why it all collapsed like that. TBH - I am not sure how to edit the HTML on the demo you provided. it seems to be importing the other demo, but I can’t change it directly there.

Thanks. Here is a codepen to edit, now using the scene.flags option:

Any thought how to avoid the collapsing ?

The viewer is using ImportMesh, which fails in the playground as well - load rhs babylon | Babylon.js Playground (babylonjs.com)

It doesn’t take the scene configuration from the file but was meant to only import the meshes from the serialized data. How are you defining the transform nodes? could you, just as a test, convert them to meshes?

Ok, that explains it. It really is a mesh viewer rather than a scene viewer. I was just hoping that there is an option for scenes.

Here is the node graph in the inspector:

The Transform nodes are created and then the meshes parented to them, nothing special. The scene is created from parsing a recipe (another 3d standard). That can contain an arbitrary transform hierarchy, so I need to use Transform nodes.

It sounds like Transform nodes would be ignored in general, so grouping everything under a single Transform node would not help. Only mesh transforms may be preserved.

I would be looking for an option in the viewer to use .SceneLoader.Load which may not be a goal for the Viewer as it focuses on nice presentation of single models.

I probably can figure out another way for have a simple scene viewer if Viewer is not targeted that way.

Hi @andreasplesch just checking in, do you have any more questions about this?

Thanks. I ended up doing a simple scene viewer based on SceneLoader in observablehq: 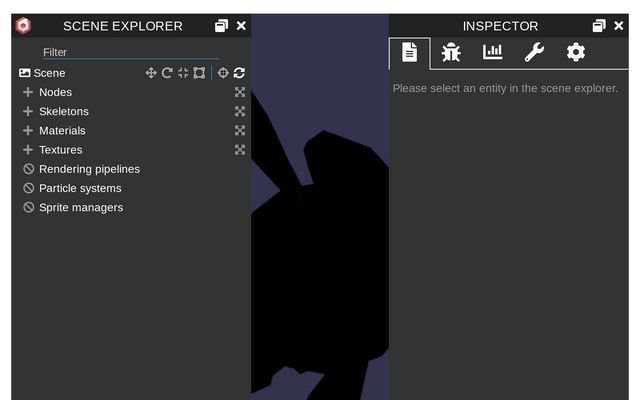 It is not too difficult to do that, so a dedicated Scene Viewer rather than Model Viewer may not be needed.