I am casting a ray from a mesh toward the camera, once the ray hits the ground the camera radius is changed to the hit point distance, then a check for intersections is done between a sphere (which has the same position as the camera but it’s distant from the ray) and all the meshes of the scene.

What can be done to have the sphere always aligned with the ray, so that the sphere wouldn’t actually hit the ground before the ray?

Try to move the camera toward the ground by moving the mouse slowly/quickly, intersections will be logged in the console.

I am quite new to any of this. I am sorry if this was already covered in another question.
Many thanks for any help you can provide.

what you could would be to use camera.onAfterCheckInputsObservable to check if the position of the camera is intersecting and then restore previously known position?

Hi @Deltakosh
Thanks for the welcome and for the help you have provided!

I have tried to use onAfterCheckInputsObservable as you suggested, however without success (most likely because I am not applying logic correctly)

I was wondering if maybe there’s a different way to do what I am trying to achieve. Basically the idea is to make a camera that orbits around the character, however, I don’t want it to slowdown on collisions, get stuck around obstacles or pass thru other meshes.

In my mind this could be achieved by attaching various ray pointing to the camera, then check if the camera is colliding with anything, if so, move the camera to the ray that has the shortest distance from the character. This way the camera would always be fast and rotate without worrying of obstacles or clipping effects.

Any suggestions are very welcome!
Thank you again for the help!

The problem is inertia. The camera to get its smooth movement uses inertia and thus even if you restore the position of the camera, it will keep moving along its inertia vector

To check if this is the case you can set camera.inertia = 0

The problem persists even after setting the inertia to 0.

I made another attempt, this time I did the following:

Despite all this, sphereCollision still hits the ground.

I’m on my phone right now but can you confirm that if you slow down the camera the problem does not happen?

We can try other observables like scene.onAfterRender for instance

As for the original PG: changing the camera speed doesn’t seem to have an impact, however by increasing the angular sensitivity, or by moving the mouse slowly, the issue does not happen.

About the second PG: increasing angual sensitivty or moving the mouse slowly doesn’t not show the issue, however at high speeds the position doesn’t seem to “reset” to a safe one (this is most likely a fault in my code)

Regarding the latest PG: similar to the other two cases, moving slowly or reducing the mesh rotation will not show the issue, however at high speeds sphereCollision still hits the ground and the rotation is not “reset”.

what should I look at?

The sphere on the right (the one that gets closer to the sphere on the left when the ray hits) goes below the ground before actually moving to the ray distance. On my side, it visibly goes below the ground for a split second, then moves back to where the ray hits (even though it should move to a safe position before the the actual frame rendering), however I am starting to think that perhaps what I want to achieve should be done in a different way, such as using the built in babylon camera collision system.

I have recorded a small clip from the latest PG that I made (the one where the mouse controls the rotation of sphereOrigin, which is the parent of sphereCollision)

This is the clip at normal speed, you can see when I move the mouse quickly the sphere on the right (sphereCollision) goes below the ground, however (toward the end) if I move the mouse slowly, it stays aligned with the ray. 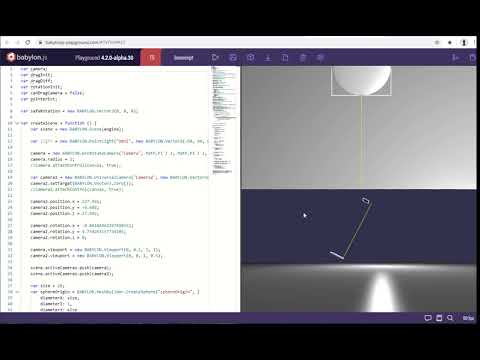 Then there’s a piece of the same clip, however slowed down from 60 to 10fps
This clip shows how much the ray lags behind the actual mesh (ray and sphereCollision are parented to sphereOrigin) 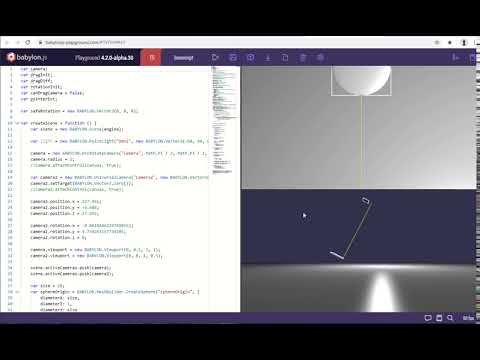 I wonder if maybe there’s something going on with the ray not picking fast enough. The ray should always be under sphereCollision.

The playground doesn’t seem to work:

Same issue on my side

Edit: Could the issue be only on my side ? 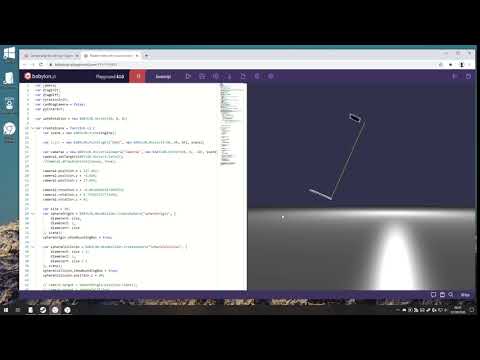 Edit 3:
The same issue happens with the version 4.2.0-alpha.30 (Latest in the playground)

OK I think I finally got it

I was losing my mind over it ahah !

Massive thanks, I feel like I can continue the project now !