Italian railways from the 1950s

Hi everyone, I’m a senior railway technician, and I started using Babylon about two years ago. I had started building my first steam locomotive with OpenScad but then it was necessary to build around it … a universe.
Thus began one of my best toys.
This is the first
working project.

I had a slow laptop and now the program runs a little too fast.
The circulation is controlled by a simple safety logic that controls the old traffic signals.
Good voyage.

sorry, i use a translator for my poor english

This is really a great toy!

Until the 1970s, electrified railway sections with old lines still existed in Italy. 3.4 kV three-phase, 16/3 Hz double wire.
I wanted to roughly reconstruct the scene.
The locomotives were equipped with two large three-phase ring motors connected with connecting rods to the wheels.
Not being able to dwell too much on the technical details, I present a scene with two convoys pulled by FS E.551.
http://libero51.altervista.org/Babylon/FS1951/FS1951.html

I added transversal transparent meshes to the path … very efficient … a little flickering …
With two triangles I play two opposing poles with shelves, suspensions, insulators …
I tried to build a lake …

This is so cool! I like that you gave us so many different camera angles, and all the little touches that bring life to the scene. As a kid who was obsessed with trains, I love this!!

This seems to me a central objective.
In my path, when I wanted to build the galleries, I spent a lot of time to effectively solve the transition of internal and external visualization.
I was unable to pierce a dynamic terrain …maybe there is a way, but I haven’t found it.

Each crisis brings new opportunities, a tiring and evolutionary way to proceed … in life.

Currently I have abandoned the dynamic terrain to move to multi-scene structures … In this way the processing is lightened and smaller single scenarios can be enriched.
There will be time to talk about it …

I have not abandoned this thread. I propose the next evolution compiled some time ago. The double track, a better transition of the tunnels. The old three-phase 50/3 Hz line. The joystick to move and the first attempt to animate a humanoid mesh. The idea of ​​populating the environment with travelers led me to deepen my knowledge of skeletons and animations. 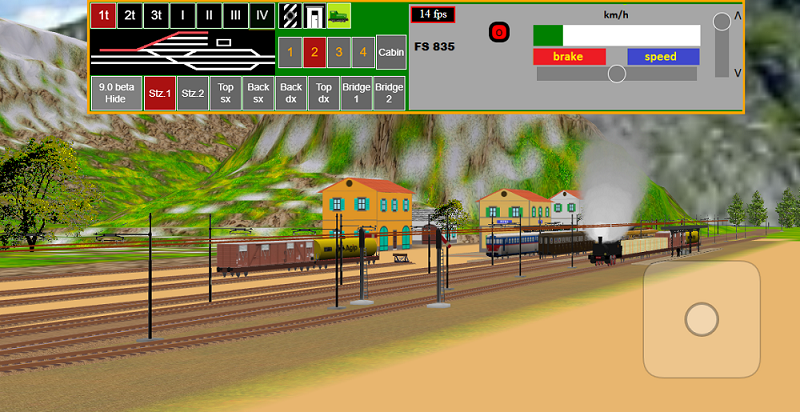 1960
This attempt takes a long time to load data.
I had to give the user the option to remove features to allow smooth viewing for less powerful machines.
The search for small animated humanoid figures began here. I don’t know where the road will lead me.
Hello everybody …

In the previous example it is evident the decrease of the fps in some critical moments … too many things to do. Not having a fully operational version yet, I propose a video of a multi-scene development. The transitions are perceptible inside the galleries.
It became possible to increase the details.
I added the roll due to the superelevation of the rail on the outside of the curves.
In a mountain valley I added an old 66kV primary power supply network, a couple of dams with hydroelectric power plants, a conversion SSE, pylons, insulators and catenaries.

The lonely scenario led me to look for solutions to small characters and animals. I am taking a long time for this and I have suspended, for now, my railway passion.
Greetings…