The docs for react-babylonjs have been quite horrendous and mostly non-existent since day 1 - maybe that is the nature of experiments. Most useful details were buried in storybook examples. Starting with a big code contribution by Ben Alfree around a year ago getting published finally today thanks to a holiday break push… the new and improved react-babylonjs documentation is out. The previous docs were using Storybook, which was great for easily adding examples, but it lacked the guided tour style of explanations for important concepts.

The examples now can be forked to a code sandbox just by clicking the “Run in Codesandbox” button (note that JSX feature request in official playground was not approved [ Jsx in playground …]). 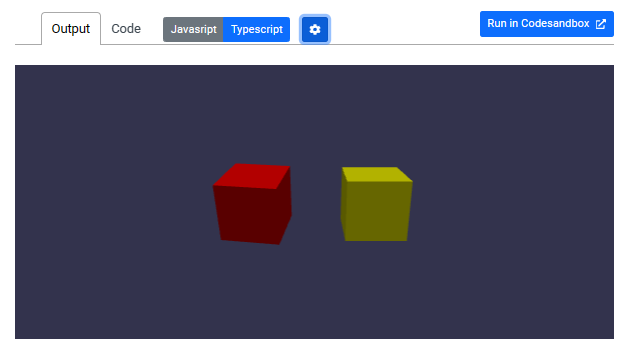 That’s going to be really useful for getting repros on issues!

Also included with all examples is ability to toggle between TypeScript and JavaScript via the language toggle. That works since the examples are all written in TypeScript and the JavaScript is transpiled, so that’s another cool feature not available on Babylon.js Playground.

Anyway, it’s all there. There are a few more pages in the works - API coverage page, keywords outside of API listings, etc. Appreciate any feedback good or bad. Cheers

nearly forgot… each page has an “Edit on Github” button!! Pages are markdown and JSX, so much easier to contribute 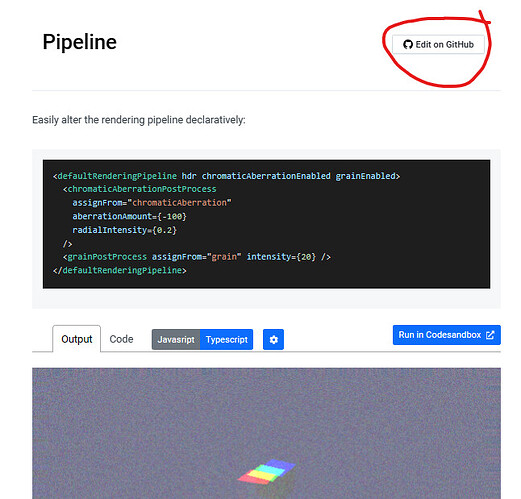 Oooh I had noticed it looked different but didn’t realize it was a full on docs updates (I’m very slow lol), congrats!!! I love how everything is neatly organized and there’s even dark mode!

Just a suggestion, the color of the links in dark mode has low contrast with the background so that would be a nice change: 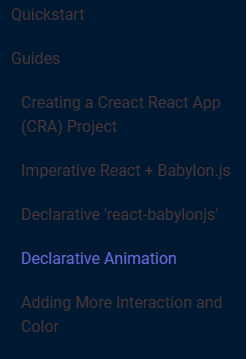 Thank you much !! We have a new team member learning react-babylonjs now and this going to make their life infinitely easier