Dauto v5 takes the usual platformer elements and places them in a racing game setting.
Race to complete the level in the least amount of time, while avoiding any and all obstacles!

So, this has been a pet project of mine for the past few months. Seeing if I could implement some platformer game mechanics in a racing game. Unlike the more traditional type of games, you can’t stop and jump, but you can brake and steer. This makes it a little tougher to balance obstacles, as you shouldn’t be forces to stop at any time. The vast, vast majority of time was spent on level design as well as getting to know the physics engine. All elements of the game runs at a fixed 60FPS at this time, as I had an issue either with the way I resolved the accumulated time, or perhaps the way I interpolated between physics frames. Either way it looked bad.

Why v5?
Dauto is actually one of the first games I ever made using BabylonJS. Version 1 was using CannonJS as physics engine and played out in an arena. Version 2 switched the arena to an actual race. V3 + V4 switched from CannonJS to AmmoJS and experimented with client-hosting, as all versions prior to v5 were all exclusively Multiplayer games. I usually dusted off the game a handful of times a year to play it with Steam friends etc.

Only one level is available for the time being, but I have others in mind, especially a level based on Snow/Ice with restitution and friction based on vertex colors, which I believe could make for some interesting gameplay.

I am absolutely rubbish at CSS, so it all needs a makeover. If it looks decent, chances are I found it somewhere else. The speedometer took too long for me to get to look better than bad, so I used meshes instead, and I’m pretty happy with the result.

Unlocks, challenges and new levels would be nice, but I feel like getting into some multiplayer FPS for the time being, so progress might get slow.

I would like to know what works and what doesn’t when it comes to obstacles and platformer elements in this type of game. Personally I would like more moving platforms as well as crazy jumps.

See if you can match or beat my personal record at 41 seconds.

EDIT: The controls are WASD + Shift for turbo. But that can be changed in options, as well as Hardware Scaling, which is pretty aggressive at default(4)

This is a fun game, nice low poly aesthetic as well. Don’t think I’d be able to top 41 seconds…

My horrible GPU is stuck with WebGL1, so I feel like the style is the right choice for me, instead of Texture Arrays and realism, which would probably take 10x as much time to setup. All previous versions of Dauto were multiplayer shooters with mini-guns, cannons, flamethrowers etc. but I feel like that would be way too much for this game. Dauto stands for Death Auto with heavy inspiration from the Death Race movies. I just kept the name for this and lazily called it a version of the same, as I lost my old code bases

A good record requires the stars to be aligned just right, but I have a new record to beat: 39 seconds 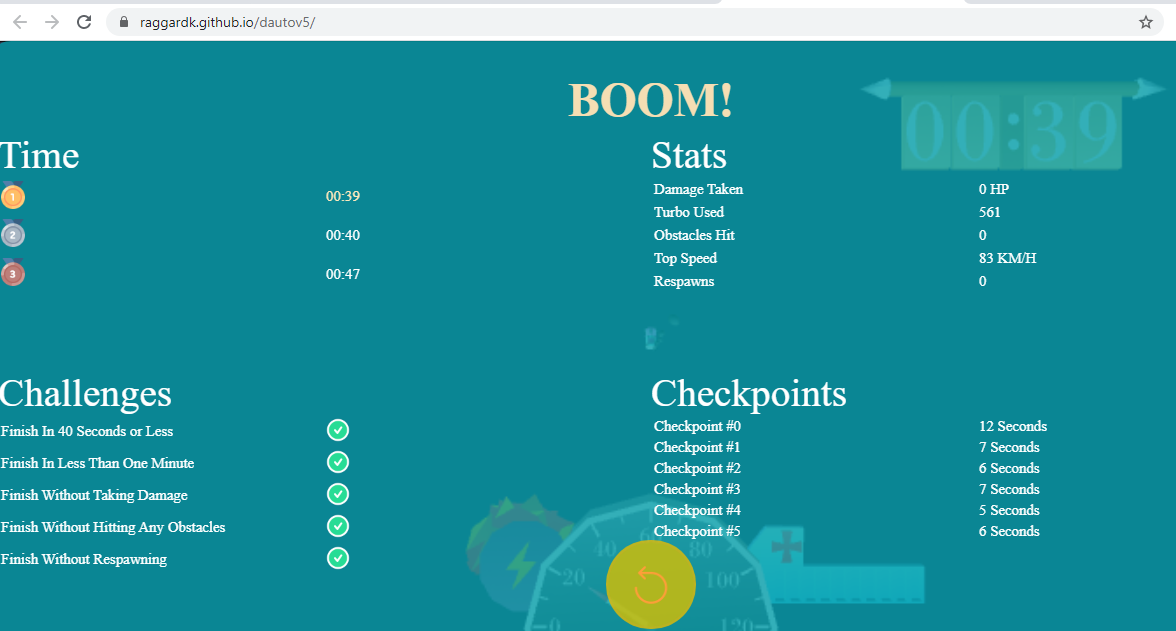 2min12 on the second run. One should silence the faen engineer who built this road