How hard is it to create a character creator?

For my PhD, I am working with virtual patient cases. These are pre-authored, usually text-based, scenarios led by the decisions of a life sciences learner. The learner is presented with an incident and they have to manage it step-by-step until the virtual patient is managed in the intended way. My contribution is to create an open ecosystem where life sciences educators can create a three-dimensional world and position objects and characters to create the simulation. This is why I chose babylon.js.

Part of this work is to develop a character creator. I would prefer it to be integrated with the babylon.js app. So far I haven’t found anything similar open source, except this one: 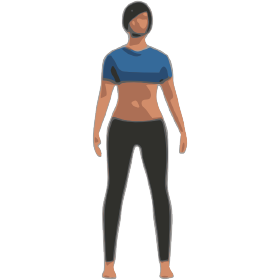 makehuman-js has 3 repositories available. Follow their code on GitHub.

which is based on three-js.

I am willing to repurpose it for babylon.js. It seems that the scripts and Jupyter notebooks provided in the makehuman-data repo are using an outdated cli flavor of makehuman to export some attributes of the model. Has anyone used this before? Would it be feasible to upgrade it for the newer version of Makehuman and integrate with babylon.js?

In short, I think I can rewrite the three.js part in babylon.js but I don’t understand if I can somehow bypass the Jupyter notebooks dependency on the old code, in order to make the project viable.

I get my stuff directly from http://www.makehumancommunity.org/ and process through Blender. It looks like as you said, this some derivative in JS with a really old snapshot of MH.

I also do not even know what a Jupyter notebook is. The only thing I can suggest is to start with an “Issue” on one of the repos. While most is 4 or 5 years old, the readme was updated 10 mos ago.

Would not recommend bringing up the conversion to BJS at the same time. You also might scroll through the other issues to see if there are big problems. Finally, there are 57 forks, maybe someone continued on elsewhere.