First noted in 5.23 and then 5.27 is still showing the same inconsistency. I can live with the axes change since its a small edit in my codes but the seasickness is making me dizzy. Was something new introduced to billboard/parenting that I missed ?

My approach would be, to create a TransformNode inbetween (because you want offset and rotation), then set node as parent of small1. At last set node.position to absolutePosition of box. This might give results you want?

Edit: It would even work without TransformNode, but you will have to update the position manually, because of offset:

Thanks, there are indeed many workarounds/hacks. I dimly recall that when billboard mode was created, it was intentionally made to exclude some parent transforms. I fail to understand the application for the billboard in its current incarnation (other than some fringe use cases). Regardless, my reason for this thread is that 5.27 broke back compat. There must be a reason the team made the decision, I want to understand what it is.

It is not difficult for me to submit a PR, but I would not know why. Pls help me understand the reason.

This seems to be the reason:

I see now. I think there wasn’t a bug, @brightMoon use case could simply be implemented using an intermediate transform node: https://playground.babylonjs.com/#NRNBMM#534

@cedric I presume its too late to revert the PR ? Can we have a programmatic switch to bypass/turn off whatever was added ? Do we open any can of worms if we do so ?

@Takemura Thanks for the follow-up ! On a weekend, no less !

Adding a transform can also solve the problem. However, for my demonstration, parent scaling is just a bug for billboard.

Therefore, it needs to be maintained by the official. It needs to be compatible with your and our cases at the same time

a) parent a plane to a cylinder,

no, Cylinder and icon plane have the same parent, they are a whole.

d) have the plane rotate around the y-axis when you rotate the cylinder and still face the camera ?

Keep it always facing the camera 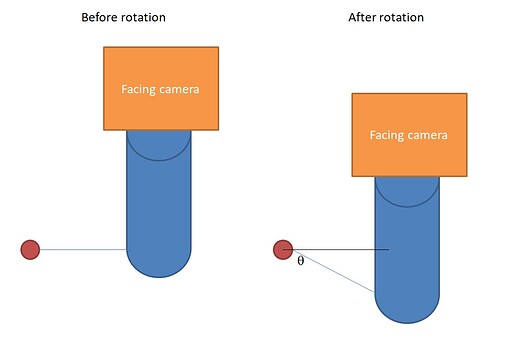 d) have the plane rotate around the y-axis when you rotate the cylinder and still face the camera ?

Yes, but I don’t think it should be assigned in real time in onAfterRenderObservable

That is only for demonstration purposes. If you remove it, just add
small1.position = cylinder.position.add(group.position); anywhere in your main code or after you scale yr cylinder in a callback to update the new position. You’ll also realize that even if you switch to 4.21, the codes still work. Hope it helps.

I believe @Cedric made some changes (but I might be mistaken). I hope he has some input about this.

Before my change, only the position was forwarded from the parent to the child. An oriented parent with a billboard child could result in the child to not appear as a billboard.
To me, billboard affect the end result. If something is billboard, then whatever his parent hierarchy is, it should appear as a billboard.
Now with Phaselock’s PG https://playground.babylonjs.com/#92Y727#292
I understand it can break back compat.
To fix it for everyone, I can add a static flag in TransformNode to apply Rotation . Default would be off for back compat.

Awesome, thanks for all the hard work! Looking forward to the fix !

My turn to hit the sack… Cheers !

Hide change for billboard hierarchy with a static flag

New flag added so @brightMoon , you have to add this line:

Yes, it seems to have no effect

I just checked and it works for me. Do you have more details?