I know it has been a long (very long) time since I last posted here. My apologies for that. The point is, when I come to the forum, I tend to just look at all the amazing things you guys do

, post a few shit comments, answer a couple of questions if I can and next thing I realize, I don’t really work my own project

Despite for not being present in the forum, I haven’t quit BJS-ing. Neither did I start growing potatoes in my backyard like I said I would if this digital crap evolution we are experiencing since 2014 would go on. I also haven’t switch to three.js and haven’t yet abandoned all hope and ego simply immersing myself into the fabulous world of meta and the metaverse

Instead, I spent the past 8 months (part-time only) working on this personal project of an “inspired by” remake of the iconic ‘BSA Bantam D1’ motorcycle (late 1948), all made with luv for BJS only:) 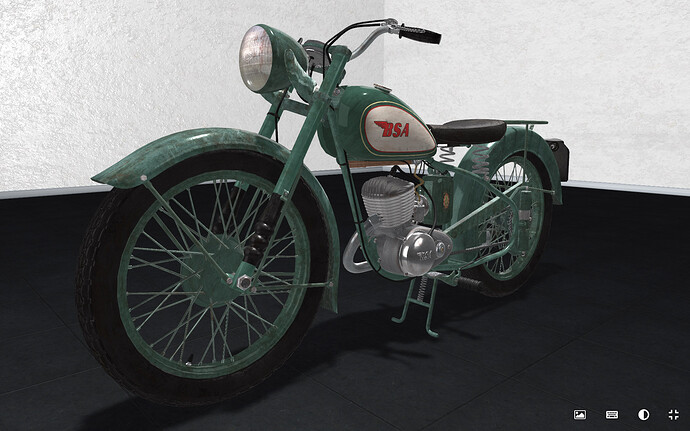 Here is a link to my preview environment of the project:
‘Project Motorcycle Alpha’

The base model worked in .c4d contains only a third of all meshes/nodes you can see on this vehicle in BJS. Also, 95% of all meshes are made from just primitives with transformers. All very simple objects, to edit, twist and tweak, interpolate and generate. The final ‘BSA D1 motorcycle’ object in BJS is, in fine, 200% worked from instances, straight in BJS from the old .obj file type exported from .c4d, of a weight of just 13.6 mb for about 160 meshes (that can still receive a level of optimization as you can see in this screenshot below). From these ~160 meshes, 200% instances are created in the BJS object constructor, bringing the count of all unmerged meshes to around 500. Finally, these imported and instanced meshes are merged together (in BJS) into prefabs; for a final count of 130 meshes for this preview version. More merges can/will be done to reduce this final count, but only at a later/final stage, since I found it’s much easier to make changes or addings before merging and parenting everything;) 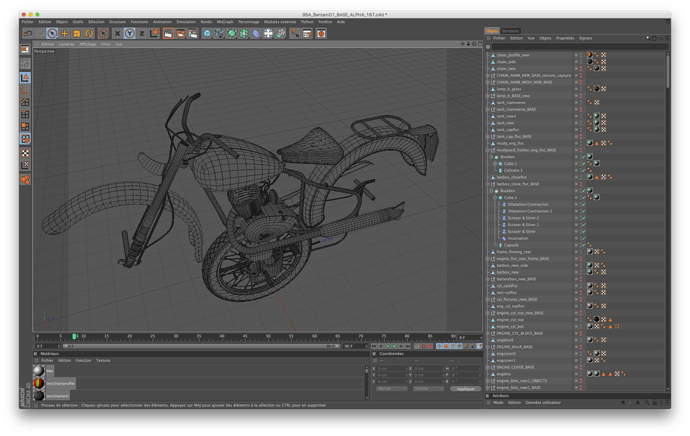 The object also contains 98% of PBR materials, all created straight in BJS (without the help of substance or other side apps). Finally, since the .obj format does not support animations, obviously, the vehicle is also 100% animated within BJS (featuring basic animations only).

The project is still WIP. I’m planning for the adding of an asset/textures manager along with a liveries manager and 1 or 2 more liveries. I’m also willing to bring audio to this vehicle, providing I can find some base of the real thing usable audio to create samples. Not just for the engine but also for all moving parts.

Currently, the object is using my favorite base of what I call “semi-realistic” textures, mostly all custom-made. I wanted to give some personality to this default version of the historical vehicle and not simply show materials and textures like the motorcycle would come straight out of the product line. There’s still a level of improvement to be done on these scratched, used/passed and rusty textures. Right now, parts of’em make the motorcycle look a bit like a zebra;) That’s because, same as for the meshes/instances, most textures and sometimes materials are also reused across the object, to save performance. 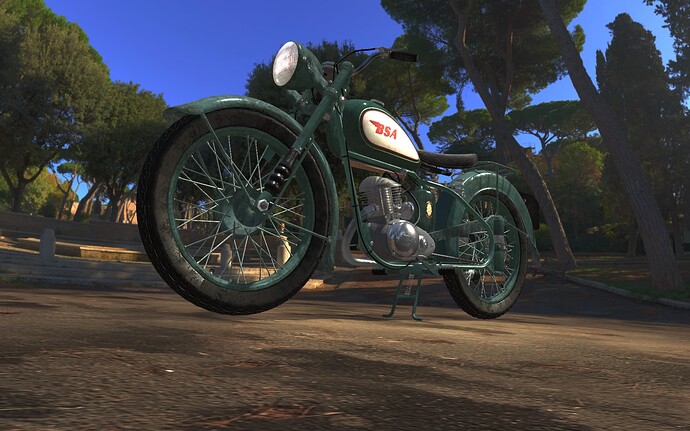 In terms of performance, the object was keeping with a stable 60 FPS on a 5Y old medium-range config, until lately:( I have to mention here that the object has also been built for the version 5a BJS but, about two weeks ago and following a nightly update (i believe on friday two weeks ago), my scene wasn’t loading anymore. Not sure what happened there, I will have to investigate. But this is where I decided to make this preview compliant with the current cdn 4.2.1 version. Sadly, I lost about 15% FPS in the process and also had to rewrite a number of instructions that were not working with 4.2. Finally, all materials created to work with the new colorspace of version 5, and despite from quickly making a few changes for the most obvious ones, my materials may just not look as good as they would with version 5.0a (in terms of colors). Anyways, as I said, this is a simple preview and you can expect further improvements to come, both in terms of design and performance. Here, I’d also want to quickly apologize for the somewhat clumsy integration of the demo grounds and environments. The purpose of this late adding of demo environments was essentially to give a reference towards how these PBR base of materials would react with a different environment and, well, let’s just say I didn’t put a lot of efforts into integration so far. Not to mention that the object is using just semi-realistic textures and the demo envs are mostly made with photodomes! 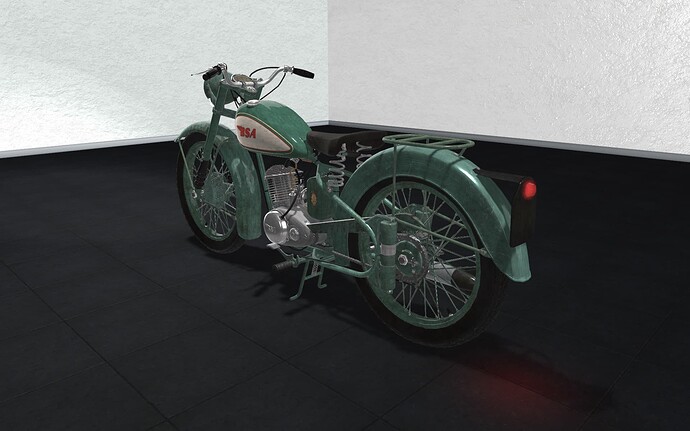 I created this vehicle object as a personal project. It will also be my first vehicle designed to potentially become a game object. Moreover, it’s my very first historical vehicle design, made from just a base template, old incomplete specs and pictures/videos and let me tell you here that… it has been a pain even to simply make it this far;) With this very old motorcycle, it appears that for every 2 pictures you can get from the Internet, the vehicle never looks the same. All of the few remaining have undergone a level of restoration and, in the end, I didn’t know anymore what it was supposed to look like. Not to mention that, with this project goal of working the principle of instanced parts to the max, a number of parts do not really look like the real thing. Which is why I choose not to call this object a repro of the ‘BSA Bantam D1’, but rather just say it has been ‘inspired by’. 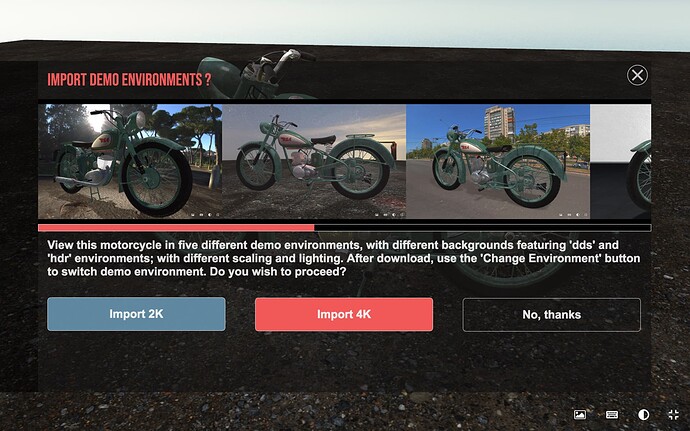 Since I’m not planning on doing anything with it, the object will also be free to use, twist and tweak to your liking, and integrate in your project. I will make all files available, including all editables. Among the parts of the project that can be worked, are the physics. I didn’t work and have no intention to work the physics of this motorcycle. To be honest, I don’t feel qualified for this and I don’t want to bring just another clumsy physics for a motorcyle. I am quite easily convinced by the physics of cars or even GA aircrafts in games/simu. Only rarely have I been convinced by motorcycle or powersports vehicles physics, including in millions dollars games. So, if anyone feels like taking on this challenge, do not hesitate:)

and don’t hesitate to ask for all files and instructions you need to initiate the process. I’ll happily provide.

This is an AMAZING work of love and craftiness!

Amazing and inspiring work @mawa. Thanks for including the explanations.