Note : Latest version is playable at this url https://svenfrankson.github.io/PlanetBuilder2022/index.html

Here (first version) is my take at babylon-based Voxel Engine. Like the title says, it’s “spherical”, which means it renders a Planet made of “nearly cubic” voxels, where each voxel has a flat surface from the point of view of an observer standing on the planet. 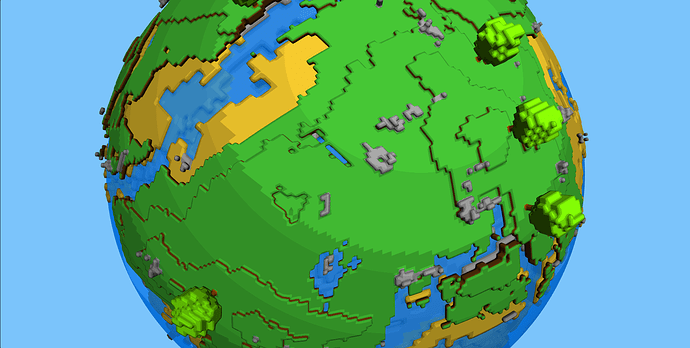 A demo is available here, while it works on mobile, it requires decent hardware.

(there’s some occurences of “double tap for ground view” not working on some locations on the planet, just try another one, I suspect it’s due to meshes being frozen and bounding box not being up to date…)

Thanks a lot for your attention and have a nice day !

Wow its really smooth on a 2020 macbook pro, solid 60 FPS. The chunks do load in slower than I can spin around though

There are so many cool game mechanics you could make with this, congrats

This is really cool, congrats !!!

This is seriously impressive! As br-matt said it runs super smooth, the ground movement is also very pleasing and the simple shading + outlines suits the look really well

While exploring around I even found some subterranean caves, how cool is that!

@PirateJC I feel this would be a super cool tweet

Thanks for the kind words

@br-matt Yes, the issue with my chuncks of voxels is that I could not find a way to easily render degraded LOD versions of them, so I’m currently experimenting a solution with patches of “heightmap based” meshes to fill the voids, hopefully it will do the trick.

Thanks, I’m no longer on Twitter, but feel free to tweet about this, it would be a pleasure

Hi, I’m back with an updated version of PlanetBuilderWeb ! 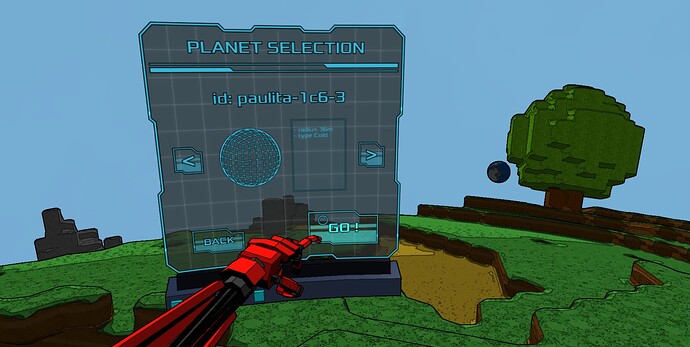 You can test it here ! Planet Builder

Again, thanks for your interest in this project and have a nice day !

Wow its come quite a ways ! Runs quite well for me.

I hope you are considering turning WebXR VR / wire hand tracking to that mesh ! Going to be pretty cool in there at scale

I did have a little trouble though:

Opening MainMenu panel is mapped to ², not 2. Now that you say that, I’m not sure ² exists on all keyboards, so I’ve mapped it to M as well.

In performance page, picking “Low”, “Medium” or “High” changes the range at which chuncks are generated, and the resolution of the screen. But because the planet is very small, it’s always rendered fully and no new chuncks are generated when switching from “Low” to “High”.

This is CRAZY COOL! Love the menu interface with the robot hand

This is very impressive and works beautifully already. Kudos to you