How to structures my scenes/code? And switching betweeen scenes?

Apologies if a question like this has already been asked, (could not find a suitable answer)

I’m trying to restrusture my single file app.js to a more structured approach, and with the ability to separate all my different screens & functionalities, in this case:

After alot of research, I could not really find many examples of how to achieve that so I came up with my own solution: https://github.com/oriongunning/orbiter-colyseus/tree/main/src

What I’m wondering if am I doing any obvious mistakes? or improvements?

Before I dive deeper, I’d like to know I have a good base,

There is no single solution for scene organization, and each project has their own requirements. I don’t see anything very bad with your scene, through you could stop the render loop while the scene wasn’t ready. If you want to get more examples of organizing scenes, I highly recommend @jelster 's book and accompanying repository

Thanks for the shout-out, @carolhmj and welcome to the community @oriongu!

I think you’re off to a good start with the code you posted. Two things I can think of for you to keep in mind or that might help would be these:

What can I say. Now we know why You wrote this book

. Though, from a marketing perspective, you should have pushed for the purchase of a hardcopy

. Not as if @carolhmj didn’t offer it to you

@oriongu Please note the joke only in this post. It’s actually part of BJS culture to help the best we can, fast and for free. Among the things I appreciate (and use

) a lot here. And then, so do I (for whatever the little my advise is worth

I would just need the IBAN for this bank account, please

When in doubt, I copy the way the SpacePirates do it (in the BabylonJS repo).

The way your doing it looks good and similar to mine. I have the main render loop in my index.ts and switching scenes is basically just switching which scene is the current one similar to yours.

I also have d.ts for any global needed game logic, maybe this isn’t smart however…

I’ve restructured slight the game loop and scene classes following you guys advice, scene is only rendered once now until we change state.

I’m still getting some “No camera defined” until the player is actually initialized, but it looks like it’s working as I want. I guess I must create the camera in the gamescene and then pass the reference to the player class, so that there is always a camera. even during “loading”.

Additionally, if I try to draw the game gui (this._setupGUI()), the whole things crashes, but I think if I solve the above, I should be fine,

On the fun side, i’ve added nameplate to the players, it looks great

. I now have a basic functionning lobby and game movement inplace 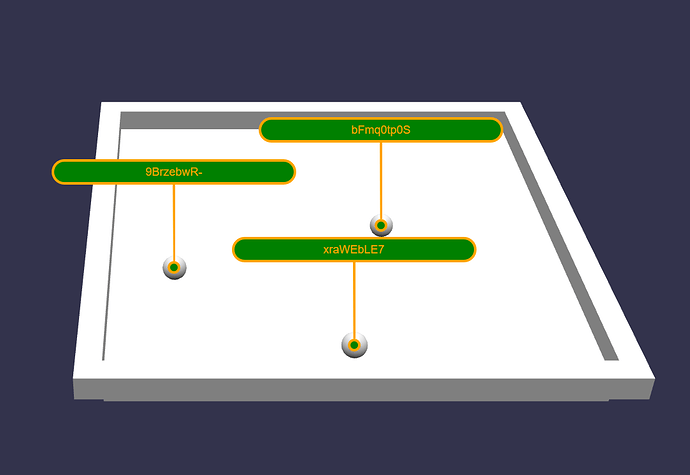 the core architecture is always harder to make than anything else

the core architecture is always harder to make than anything else