Im trying to do something that im sure has been done thousands of times: take multiple animations from mixamo (idle, walk & run), put them into blender, and then use them in babylon blended together with weights.

I have followed the tutorial here as well as numerous youtube videos, and even got it mostly working, but on redoing it im getting a persistant issue: every animation is blended with the original T-pose of the model, giving it this weird slenderman stretchy arm effect: 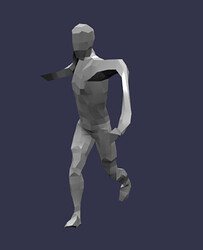 here is a playground showing the issue (animation will autoplay or can be viewed in inspector):

I am exporting the skeleton and mesh from the .babylon file and pasting and using Mesh.Parse() / Skeleton.Parse() rather then importing the babylon file itself.

The issue is that when viewed in Blender, and even in the Babylon Sandbox (dragging the babylon file in), the t-pose blending isnt visible:

A lot of this issue seems to be in the Blender side, as there are the “NLA” animation formats (NLA - a blender concept where animations are treated as clips that can have effects on them and be stacked etc, instead of just a series of keyframes, so they can be composed easier) that have an effect on the final babylon output (some youtube tutorials use these and it actually created a better result for me…) BUT these NLA clips are obviously not exported - it seems that something in the pipeline is effecting the matrices of the animations, so morphing the animation poses to always have the t-pose somehow contained.

Thius is what my Blender scene looks like following the above tutorial: 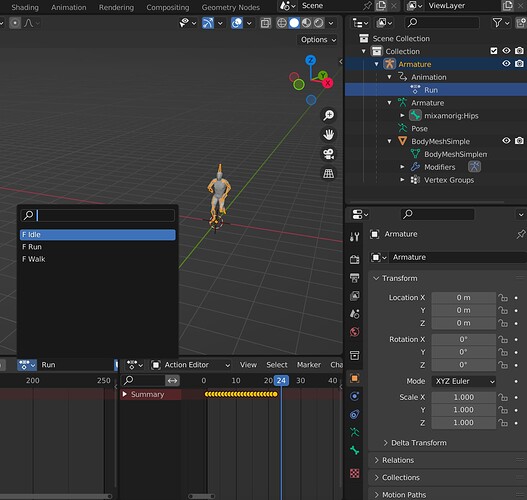 Does anyone have any suggestions of a complete walkthrough that avoids these issues, or things to look out for?

Ok, I have found the issue, it was because there was a slightly different version of the mesh, and this had its own transform that was blending with what the skeleton was doing. It seems that Blender’s NLA/animation frames etc dont really have an effect and there are multiple setups that will do the same thing… false alarm!