Following instructions and have my character set within Blender but when I get to “Alpha_Joints_MAT”(Beta in this version) it says export v. 6.9.3 but see 2.9.3 and no .babylon file. I must be overlooking something but don’t know what it is.

Adding @thomlucc who did this not too long ago

Hey @Mekaboo, I created and animated a character following tutorials and got stuck when combining several Mixamo animations into one model. Luckily, I found a video that unblocked me: Combining Mixamo animations in Blender 2.8 for BabylonJS - YouTube

Here is also the link to the documentation page I created with all the steps I went through to create and animate the character in a Babylon.js Playground: Animating Characters | Babylon.js Documentation

For now keeping things crazy simple since this is quite new to me so I combined the bot with the animation within Mixamo then in Blender tweaked the animation. Now just want to bring that into BJS and find a simple Woman/Man .glb file to place on.

Parts of what I saw in the step by step instructions seem to be missing in order to bring the bot into BJS from Blender.

When I did it, the trick was to export from Blender into a .glb (the video I send you) instead of exporting into a .babylon file (I am new in animations and in Blender so I needed an easy workflow to follow

If you are following this tutorial, and it isn’t working for you, we’ll have to see how to bring more people to help you, because I went through another path by exporting into a .glb. Is this your case?

I would greatly appreciate it

I followed this tutorial and the part that I’m stuck at is the Exporter 6.2.3 because when I click the link its version 2.9.3.

@Mekaboo Exactly what version of Blender are you using?

Exporters of 6.2.x, are for Blender versions Blender 2.9 or earlier. @thomlucc 's tutorials may have been done with one of those older versions of Blender.

My apologies to you, @sebavan and @thomlucc I confused myself within Blender…now I got it!! Im using the right versions just mixed things up.

While I did not read this whole thread, I specifically started naming my versions after the minimum Blender it works for. The last number is the exporter version for any patches. It was not worth the extra of having its own numbering.

The exporter is now a very mature system. With the yearly LTS release process of Blender, I just decided to do any enhancements / API changes to coincide with that.

@Mekaboo NP. We were all new once

for the tool echan00 linked, there is a video review with instructions here. 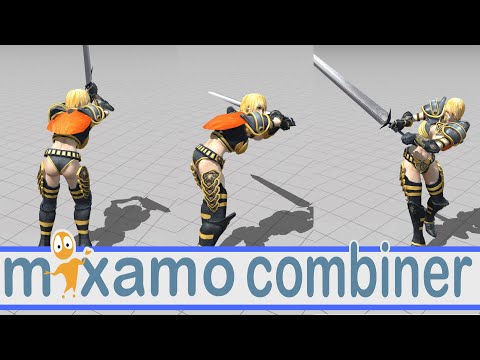 This has been on my mind for a while because I wondered how to combine animations for games.

This link (Character Animation Combiner) was unavailable for about one year, thanks for the info that it is working again!
(I already tested it locally and it works).

I thought I finally figured everything out… but maybe not. Everything looks good when I combine the character animations

But when I export to .gltf and import to sandbox.babylonjs.com, I get the following:

Anybody run into this issue?

EDIT:
If I don’t use the character animation combiner and follow the directions as suggested in the babylonjs documentation to combine the animations in blender, it is a little bit better but still having issues:

@JCPalmer maybe you can help him with this or point him in the right direction.

@echan00 did you make the character yourself? I’m going to start teaching myself to build characters because I’m having issues converting ones already made.

@Mekaboo no it was purchased

The validation error I see:

If anyone is nice enough to take a look, I’ve included my character model at every stage
steps.zip (1.3 MB)

I do not really do GLB, but just querying Skeleton node is not a common root. I get an explanation on a c++ site, c++ - What does it mean when gltf does not specify a skeleton value in a skin? - Stack Overflow

I just submitted a PR that will allow you to load assets with invalid skeleton values.

You can also do this in the sandbox, but you have to load a model first before you can modify the settings. The settings will stick around until you refresh the page.