Babylon.js does not work on iOS 14.2 Safari browser 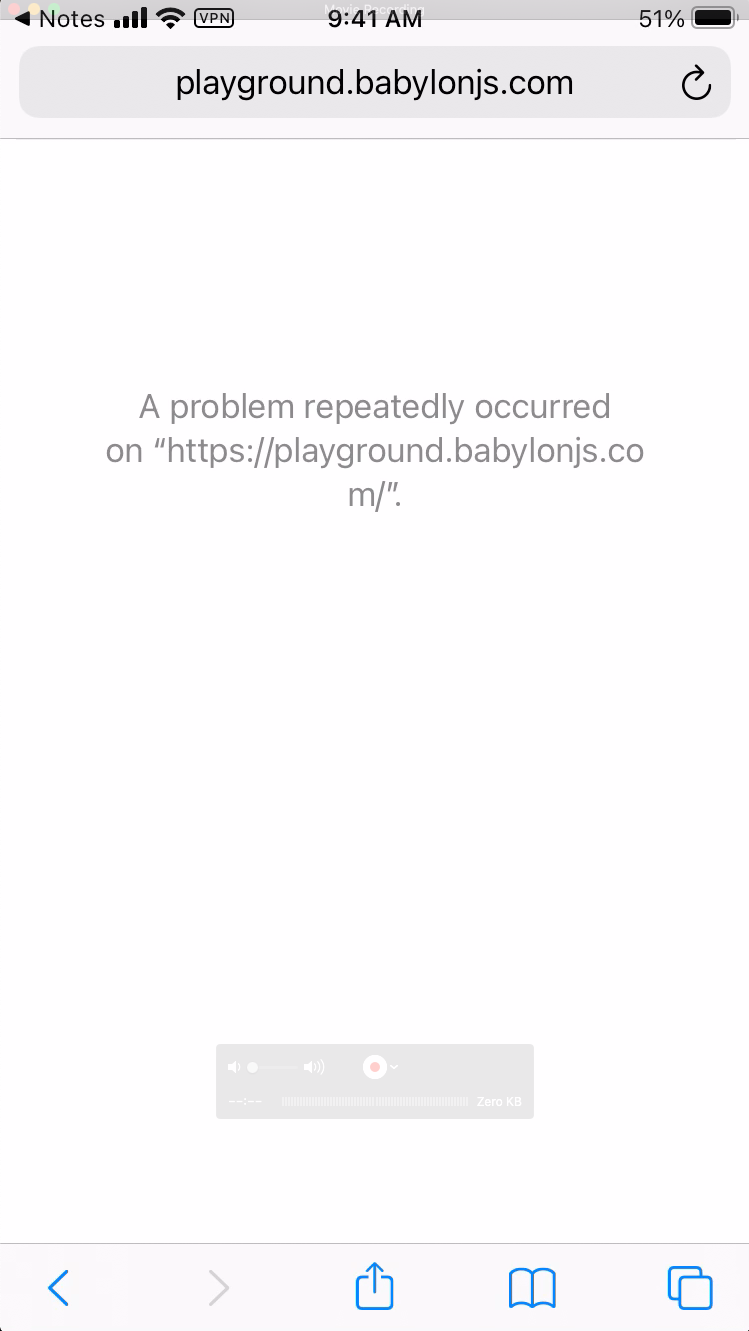 I got that on a completely unrelated page on an iPad. Try again after a restart.

I got that on a completely unrelated page on an iPad. Try again after a restart.

What? that is irrelevant to this.

I am able to reproduce the issue posted. This only happens as of 14.2 beta. It happens with all projects with babylon

Assuming your PG loads 4.2 beta version of babylon (default), and your product uses the stable 4.1.
If these asumptions are correct, i don’t see how it can be a babylon bug

And when I go to https://get.webgl.org/ on the 14.2 beta safari browser, I can load the page fine and see the spinning cube

as I don’t have (and don’t plan to install) ios14.2 beta I would need your help
First my guess is that is is linked to a safari issue so you should post to their forum if you want a quick fix

second: can you debug it and see what is on the console? any errors?

There is not much in the console. See below screenshot. The 404 request there shows up in iOS14 safari browser as well where babylon playground loads fine, so might just be a red herring. No failed request in the Network tab neither.

that is really weird. You should at least have one message like “babylon.js v4.2…”

Right I was expecting to see the babylon version message as well but it did not show up. When loading babylon playground, the browser reloaded twice and the the page crashed with a vague error A problem repeatedly occurred on .... I put the whole screen recording and console output together for reference, see below.

The babylon playground intro/loading page did however show up before the page crashed, according to the screen recording

I almost sure this is something wrong with ios and webgl2

For the last week or two we’ve been getting reports of iOS issues, with the context being lost suddenly, and then being unable to recover. I was able to reproduce it once on 14.0, WebGL 1 on BJS 4.1. I can’t say for sure it is related, but we didn’t get these reports previously.

Is this supposed to help with the babylon playground issue we are seeing in Safari 14.2?

To test out whether it’s a WebGL issue, I tried Three.JS examples too on iOS14.2 Safari browser. URL: three.js examples

iOS14.2 Safari did not crash for Three.JS example.

Can you try again? I removed the webgl2 support for safari (You will need to clean the cache)

@Deltakosh - Thanks for response - should I wait until playground version (https://playground.babylonjs.com/) gets updated to another version other than 4.2.0-beta6 ? I just tried going to the site, after deleting caches, but still Safari crashed.

beta 6 is already the one with no webgl2 support

Maybe wrapping the internal pg code in a big try/catch could give a clue?